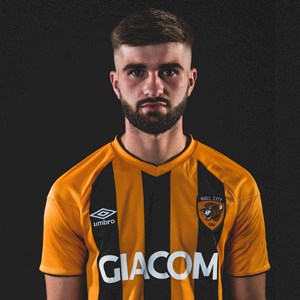 Brandon Fleming is the latest homegrown left-back to feature at first team level for Hull City.

Following in the footsteps of Josh Tymon and Max Clark, Fleming has come through the Club’s Academy system having joined the Tigers as an Under-10 and the 2018/19 season was his first as a regular face in the Tigers’ first team squad.

It was actually a year earlier that Fleming made his senior debut when he was named in a youthful side for a Carabao Cup tie against Doncaster Rovers. He also spent part of that 2017/18 campaign out on loan at Gainsborough Trinity, making three National League North appearances during a brief stay at The Martin & Co Arena.

First-team football came early in 2018/19 with Fleming again starting in the League Cup competition for ties with Sheffield United and Derby County, while a first Championship start came in December when he lined up against Millwall at The Den - at the age of 19.

A further three league appearances came Fleming’s way before the end of the campaign, all from the bench, and he continued his progression in 2019/20 with seven games under Grant McCann - four of which came in the Championship - before joining League One Bolton Wanderers on loan in January 2020.

The beneficial temporary spell at the University of Bolton Stadium saw him feature ten times in the second half of the season, all of which came in the third tier of English football.