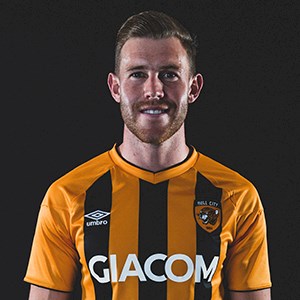 Callum Elder joined Hull City in August 2019, arriving from Leicester City for an undisclosed and signing a three-year deal.

Born in Sydney, Elder joined the Foxes as a 16-year-old scholar, impressing the Foxes enough to earn a professional contract at the end of the 2012/13 campaign.

Although he failed to make a first-team appearance for the Foxes, he arrived at the KCOM Stadium with almost 100 career games to his name following loan spells at Mansfield Town, Peterborough United, Brentford, Barnsley, Wigan Athletic and Ipswich Town.

Elder’s most successful loan spell away from the King Power Stadium was undoubtedly whilst with Wigan Athletic in 2017/18. He racked up a total of 33 appearances in all competitions and helped the Latics to claim the League One title, with Paul Cook’s side keeping 15 clean sheets with Elder in the team.

After gaining Championship experience with temporary spells at Both Brentford and Barnsley, the now 25-year-old returned to the second tier with a five-game loan stint at Ipswich Town in 2018/19.

Elder was reunited with Grant McCann when joining the Tigers - having previously worked the Northern Irishman during his time at Peterborough - and made 30 appearances in his first season at the KCOM Stadium.


James Scott and Josh Magennis will be available for Hull City’s trip to Gillingham after returning from international duty.