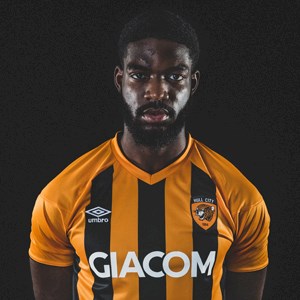 Hull City announced the signing of Festus Arthur from Stockport County for an undisclosed fee in July 2020.

The 20-year-old, who was born in Hamburg and is of Ghanaian descent, penned a three-year deal with a Club option of a further year at the KCOM Stadium.

A powerful centre-half who can also operate in midfield, Arthur learned his trade at Oldham Athletic before being released ahead of joining Stockport on non-contract terms in July 2019.

It was only in August last year that Arthur was handed his first appearance in the National League – a 3-2 win at home to eventual title-winners Barrow – but the 20-year-old didn't take a backward step following his debut.

His breakthrough season saw him feature 35 times in all competitions, scoring twice, and quickly establish himself as a cult hero amongst Stockport fans. His impressive contribution on the pitch also saw him secure him two awards when named as the Grahame White Young Player of the Year and George Haigh young Player of the Year.

And his rapid development was rewarded with a move to the Tigers, where he will now look to kick on in black and amber.