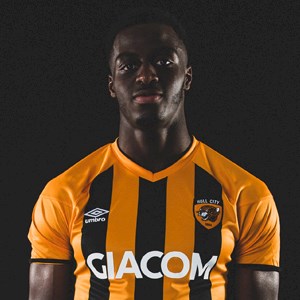 Josh Emmanuel joined the Tigers' ranks as a free agent in the summer of 2020 after penning a two-year deal at the KCOM Stadium.

Born in London, Emmanuel began his career in West Ham United's Academy ranks at the age of six before joining the youth set-up at Ipswich Town aged 13.

After progressing through the ranks at Portman Road, the attacking full-back signed his first professional deal in August 2015 and made his competitive debut away at Brentford on the opening day of 2015/16, bagging an assist to help Mick McCarthy's side pick up a point in a 2-2 draw. Emmanuel made a further six appearances for the Suffolk outfit that season, whilst also gaining further first-team experience with a two-game loan spell at Crawley Town.

He featured 17 times for Ipswich in 2016/17, all but two of which came in the Championship, before enjoying an impressive loan spell at Rotherham United in League One the following season.

He went on to make 31 league appearances and 38 in total for the Millers as the South Yorkshire outfit secured promotion to the Championship via the play-offs, with his contribution on the pitch securing him the club's Young Player of the Year award.

More League One experience was gained with a 20-game loan spell at Shrewsbury Town in the first half of the 2018/19 season, before returning to Portman Road to make four appearances in the Championship.

One more appearance as an Ipswich Town player came in the Carabao Cup before Emmanuel departed on a permanent basis when joining Bolton Wanderers in September 2019. He was a regular fixture for the Trotters last term, making 31 appearances in all competitions - 27 of which came in League One.