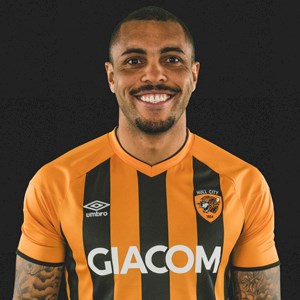 Josh Magennis bolstered the Tigers' attacking ranks when he joined the Club from Bolton Wanderers in August 2019.

The Northern Irish international penned a two-year deal at the KCOM Stadium, with a Club option of a further twelve months.

Having spent his younger years with Bryansburn Rangers, Lisburn Distillery and Glentoran, Magennis headed to the Welsh capital to join Cardiff City’s Academy as a teenage goalkeeper - despite starting out as an outfield player!

Magennis even made the substitutes bench for the first-team in a League Cup tie for the Bluebirds against Liverpool but the coaches at Ninian Park obviously saw his potential to play up front rather than between the sticks and signed his first professional contract with the Welsh side in April 2009.

He eventually made his senior debut for Cardiff as a substitute on the opening weekend of the 2009/10 season during a 4-0 victory over Scunthorpe United and it took Magennis just four appearances to score his first senior goal, netting in a 3-1 League Cup victory over Bristol Rovers.

His career has also seen him play for Grimsby Town (loan), Aberdeen, St Mirren (loan), Kilmarnock, Charlton Athletic and Bolton Wanderers before arriving at the KCOM with a wealth of experience having made more than 360 career appearances at Club level - scoring 61 goals - whilst also boasting 44 appearances and six goals at international level.

His debut season with the Tigers saw him find the back of the net five times in 32 appearances in all competitions. 
Josh Magennis, Richie Smallwood and Keane Lewis-Potter are the next trio of Tigers to take on the “Test Your Metal” challenge as part of a new monthly competition, in association with Club partner The... 
Josh Magennis was thrilled to see Hull City’s work on the training ground pay off in the 3-1 win at MK Dons.