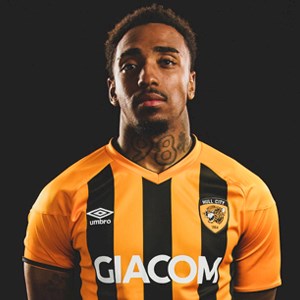 A forward with exceptional pace, trickery and power, Mallik Wilks became the latest addition to Grant McCann's squad when arriving from Barnsley on loan in January 2020.

Having progressed through the youth system at Leeds United, Wilks furthered his footballing education with loan spells at Accrington Stanley and Grimsby Town in 2017/18. He began the campaign at Accrington, scoring five goals in seven starts and 24 appearances in total for the Wham Stadium outfit, picking up a League Two winners' medal in the process.

Wilks spent the second half of the season with the Mariners but was limited to just six appearances during his time at Blundell Park due to injury.

His breakthrough season came in 2018/19 whilst on-loan with Doncaster Rovers, where he flourished working with current Tigers Head Coach Grant McCann scoring 16 goals and providing 12 assists in League One. His impressive contribution on the pitch seeing him named as Rovers' Social Media Player of the Year, after accumulating the most man-of-the-match performances during the campaign.

His sparkling performances in League One saw him become hot property at the end of that campaign and it was Barnsley who beat off stiff competition from several other clubs to add him to their ranks on a four-year deal ahead of their return to the second tier.

However, his time at Oakwell proved to be frustrating having made just eight starts and 15 appearances in all competitions, scoring once before arriving at the KCOM Stadium. Wilks scored four goals in 13 games before his temporary move was made permanent in July, finishing the campaign with a tally of five goals in 19 appearances.

McCann: Wilks can be anything he wants to be


Grant McCann believes forward Mallik Wilks has the attributes to be anything he wants to be.


Head Coach Grant McCann says that Mallik Wilks could be set to return for tomorrow’s trip to Fleetwood Town.


Head Coach Grant McCann has confirmed that captain Richie Smallwood and forward Mallik Wilks are “pushing” for an early return this weekend against Plymouth Argyle.

McCann: More to come from Mallik


Grant McCann insists there is more to come from Mallik Wilks following the forward’s electric start to the season.