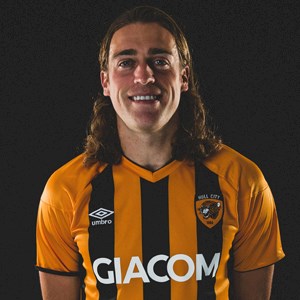 Tom Eaves signed for Hull City in July 2019 following the expiry of his contract with Gillingham.

The tall front-man started his career in the Academy ranks at Crewe Alexandra before moving onto Oldham Athletic where he was given his first professional contract. Having shown plenty of early promise in his career, the striker was snapped up by then Premier League side Bolton Wanderers in August 2010 - just two weeks after scoring a hat-trick against the Trotters in a pre-season friendly.

He enjoyed loan spells at both Bristol Rovers and Shrewsbury Town during the 2012/13 campaign  before being rewarded with a Bolton debut away at Leicester City in the Championship in the latter stages of the 2012/13 campaign and two further appearances in home clashes with Middlesbrough and Blackpool.

Eaves gained further first team experience in the third tier of English football with Rotherham United in 2013/14, scoring once in nine appearances, before rejoining Shrewsbury on a temporary basis in November 2013, a deal that was extended for the remainder of the season which saw him net twice in 25 appearances.

Further loan stints at Yeovil Town and Bury followed in 2014/15 before being released at the end of that season, which allowed him to join Yeovil on a one-year permanent deal in July 2016. Despite scoring seven goals in 48 games for the Huish Park outfit, Eaves was released by Yeovil at the end of his contract following the conclusion of the 2016/17 season.

His next move saw him join Gillingham on a two-year deal in June 2017 - a switch which Eaves later said reignited his passion for the game. He established himself as an integral member of the Gills' squad in his first season with the Kent club, scoring an impressive 18 goals, and surpassed that total in 2018/19 with a total of 22 goals in all competitions.

His debut season at the KCOM Stadium brought a reward of eight goals in 24 starts and 44 appearances in all competitions - including a hat-trick against Rotherham United in the FA Cup in January 2020.


Head Coach Grant McCann has confirmed that striker Tom Eaves will travel with the squad to AFC Wimbledon after recovering from injury.


Tigers’ forward Tom Eaves says he wants to add more goals to his game throughout the 2020/21 season.