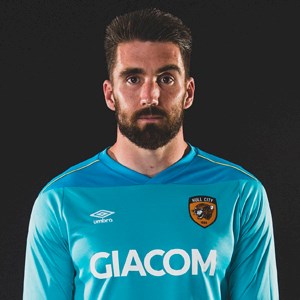 Born in High Wycombe, the custodian joined hometown club Wycombe Wanderers as a youngster and, whilst still a first-year scholar, Ingram was called up to the first-team squad for Choirboys' League Two match against Shrewsbury Town in September 2010, appearing on the substitutes' bench.

A work experience spell with Isthmian League Premier Division club Lewes followed in early 2012 before his progress and development was rewarded with a first professional contract at the club in May 2012.

Loan spells at Conference South club Hayes & Yeading United and Conference North club Oxford City followed during the 2012/13 season, which saw him make a total of 21 appearances, before being handed his first-team debut for Wycombe against Accrington Stanley in March 2013.

He went on to make 139 appearances for the Choirboys in all competitions, with his impressive form between the posts securing a move to Queens Park Rangers in January 2016. Ingram only featured in two games for the Rs in the remainder of the 2015/16 season but did manage to keep two clean sheets in those appearances.

Chances were again limited the following campaign and spent the first half of 2017/18 on loan at Northampton Town, making 20 appearances before being recalled in January, playing twice for QPR in the latter stages of the campaign.

More frustration followed in 2018/19 as he was limited to just seven appearances in all competitions, also featuring once for Wycombe after returning to his former club on an emergency loan deal in November 2018.

Ingram has featured four times for the Tigers since arriving at the KCOM Stadium, with one league and three cup appearances to his name ahead of the start of the 2020/21 campaign.

Ingram: Gutted With The Result, But No Time To Dwell


Goalkeeper Matt Ingram says that he and his Hull City teammates are eager to make quick amends for Saturday’s 1-0 defeat at home to MK Dons.


Matt Ingram says he and his Hull City teammates are determined to respond to Saturday’s defeat when they face Blackpool this evening. Ingram: We Were Off The Pace


Matt Ingram was disappointed with both the performance and result in Saturday’s 1-0 defeat against Shrewsbury Town.