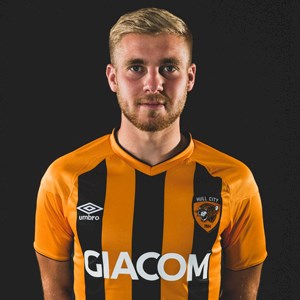 Born in West Yorkshire, Batty was on the books of Leeds United as a youngster but was released and the Tigers pounced to add the talented midfielder to their youth ranks at the age of 16.

Some impressive performances for the Club’s development side and grasping the opportunity when invited to train with the senior squad in pre-season brought him into the first team picture during the 2016/17 Premier League season, but despite being named on the bench on a few occasions a senior debut would elude him for the time being at least.

That debut arrived early in 2017/18 when Batty was part of a young side that lined up for a Carabao Cup tie against Doncaster Rovers and he followed that up with a loan stint at FC Halifax Town, where he scored twice in five appearances.

He returned to the KCOM Stadium and came off the bench as the Tigers beat Nottingham Forest in an FA Cup fourth round tie, before featuring again against Chelsea at Stamford Bridge in the next round.

Batty continued to be around the squad and was rewarded on the final day of the season when handed a first Championship start against Brentford. Playing the full 90 minutes, he gave a glimpse of the talent that Hull City fans would see on a regular basis over the 2018/19 and 2019/20 seasons, during which he has featured 63 times in all competitions, scoring his only senior goal in a black and amber shirt away at Swansea City on the opening day of the previous campaign.