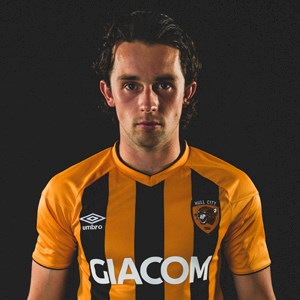 Hull City completed the signing of George Honeyman on a three-year deal in August 2019.

The midfielder joined the Tigers from boyhood club Sunderland, first signing for the Black Cats' Academy set-up at the age of ten. After progressing through the Wearsiders' youth ranks, he was rewarded with a first professional contract at the end of the 2012/13 campaign before being handed a first-team debut when coming off the bench against Bradford City in an FA Cup tie in February 2015.

The following season saw Honeyman head out on loan to National Conference side Gateshead, where he made nine appearances and netted the first goal of his career when scoring the winner in a 3–2 triumph at Boreham Wood in October 2015.

The 22-year-old made his Premier League debut for Sunderland at Watford in May 2016 before making a further 10 appearances during the 2016/17 campaign. However, Honeyman had to wait until August 2017 for his first senior goal in red and white when he scored the only goal of the game as Sunderland booked their place in Round Two of the Carabao Cup with victory over Bury.

And a week later, he was on the scoresheet again, this time netting in the Sky Bet Championship against Sheffield Wednesday, going on to score seven goals - and two assists - in 45 games in all competitions.

A hard-working player with a fine combination of youth and experience, Honeyman was appointed as Sunderland's new captain at the age of just 23 and led his side the Checkatrade Trophy Final and League One Play-Off Final in his final season at the Stadium of Light.

Following his switch to the Tigers, Honeyman finished the 2019/20 campaign with one goal in 44 appearances in all competitions - with his solitary strike coming in a 2-1 away win at Queens Park Rangers in December 2019.

Honeyman And Greaves Fit For Plymouth

McCann: Honeyman Is A Born Winner

Honeyman's Only Interest Is In Helping The Team


He leads the way when it comes to setting up team-mates for goals in Sky Bet League One, but George Honeyman insists that he takes little notice of personal statistics.

It Was A Good Team Performance - Honeyman