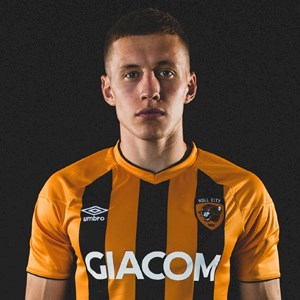 Greg Docherty returned to English football when signing for Hull City from Glasgow Rangers in August 2020.

The 24-year-old midfielder put pen-to-paper on a three-year deal at the KCOM Stadium to become Grant McCann's fourth signing of the summer ahead of the 2020/21 season.

After rising through the youth ranks at Hamilton Academicals, he signed his first professional deal at the age of 16 prior to making his debut as a 78th-minute substitute against Alloa in December 2013 - aged just 17.

Docherty went on to feature 108 times in a Hamilton shirt, scoring eight goals, before earning a move to Rangers in January 2018. In his first half-season at Ibrox, Docherty found himself in and out of Graeme Murty's side but still managed to contribute three assists in 14 appearances.

However, he was allowed to go out on loan to gain further first-team experience in the summer of 2018, joining League One Shrewsbury Town, where made a huge impression during the 2018/19 campaign. Docherty contributed an impressive ten goals and eleven assists from midfield, statistics which saw him named as the Shrews' Player of the Year.

He returned to Rangers hoping to break into the first team but was restricted to just five appearances across the Scottish League Cup and Europa League qualifying rounds before moving to Hibernian on loan in January 2020.

Although his time at Easter Road was halted by the coronavirus pandemic, he still made a big impact for Jack Ross' side - scoring three goals and registering five assists in eight games in all competitions.


Greg Docherty wants the Tigers to make the KCOM Stadium a fortress this season as he and his Hull City teammates prepare to welcome their first league opposition to the East Yorkshire tomorrow... 
Greg Docherty reflected on a good day’s work for Hull City following their 2-0 victory over Gillingham on Saturday.