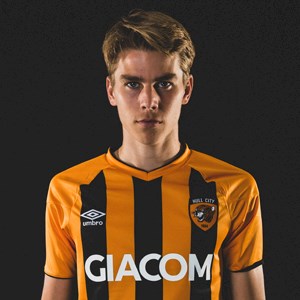 Out On Loan
With Aalborg BK

Hull City completed the signing of Martin Samuelsen from West Ham United for an undisclosed fee in January 2020.

The versatile Norwegian - who can operate on either flank or through the middle as a number 9 or 10 - penned a two-and-a-half year deal at the KCOM Stadium.

Born in Haugesund, Samuelsen initially moved to English football with Manchester City at the age of 15 but departed to join the Hammers in the summer of 2015 after three years at the Etihad Stadium.

Penning a two-year deal at Upton Park, he made his competitive debut in a Europa League qualifying round first-leg win over Malta outfit Birkikara FC before joining Peterborough United on loan in November 2015. He made a total of 20 appearances as a Posh player in all competitions, two of which came under Grant McCann's temporary spell in charge at London Road, before returning to his parent club.

After returning to West Ham, he was on the move once again in February 2019 when moving to hometown club FK Haugesund on loan, where he scored 14 goals in 39 appearances in all competitions, as well as racking up five assists before returning to East London.

After six loan spells during his time as a Hammer, Samuelsen opted for a permanent move for the next step in his career when joining the Tigers and made eight appearances in all competitions in his first season as a Hull City player.


Martin Samuelsen has today joined Danish side Aalborg BK on loan until the end of the season, with the Superliga club having an option to make the midfielder’s move permanent at the end of the...

Samuelsen Delighted To Help Tigers Through


Martin Samuelsen was pleased to help smooth Hull City’s passage through to the knockout stages of the Papa John’s Trophy with a two-goal display in a 3-0 victory over Grimsby Town.