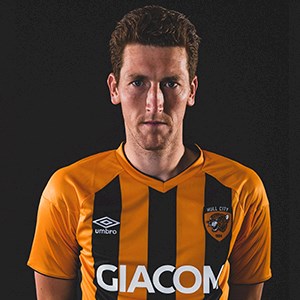 Richie Smallwood arrived at the KCOM Stadium as a free agent after penning a two-year deal - with a club option of a further 12 months - in August 2020.

Starting his career at local club Middlesbrough, Smallwood came through the youth system at the Riverside before turning professional in 2010 and going on to amass 72 appearances for the Teesside outfit in all competitions - with the vast majority of those coming in the Championship - scoring four goals.

Following an impressive loan stint at Rotherham United, where he won promotion via the League One play-offs in 2013/14, Smallwood made the permanent move to South Yorkshire and quickly become a regular fixture in the Millers' midfield during his three years at the AESSEAL New York Stadium.

He enjoyed a loan stint at Scunthorpe United in August 2016, scoring once in 16 outings before being recalled by Rotherham in January 2017 but opted to turn down the offer a new contract in order to link up with Tony Mowbray - having previously worked with him at Middlesbrough - once again at Blackburn Rovers.

Smallwood's tough-tackling, all-action and wholehearted performances quickly endeared him to the Rovers' faithful, who crowned him the 'King of Ewood'. The midfielder made 52 appearances in an outstanding debut season in East Lancashire, playing a major role in Blackburn's promotion-winning return to the Championship.

He impressed on his return to the second tier, featuring 33 times in all competitions with all but one of those appearances coming in league fixtures. However, 2019/20 proved to be a much more frustrating experience for Redcar-born Smallwood, who made just two appearances - both of which came in the Carabao Cup.

The 29-year-old was one of five players to depart Ewood Park following the expiry of his contract in July, and will go in search of a third promotion from League One with the Tigers.

Promotion Is A Credit To Everybody Involved - Smallwood


Richie Smallwood says that coming back from injury into a side on the verge of promotion is all that he could have asked for during his time on the sidelines.


Grant McCann is hoping to have captain Richie Smallwood and defender Reece Burke back available for Tuesday’s match against Sunderland.


Grant McCann has been handed a fitness boost with the news club captain Richie Smallwood is closing in on a return to action.

Smallwood Ruled Out For The Season


Captain Richie Smallwood has been ruled out for the rest of the season, Head Coach Grant McCann has confirmed.